Go on, judge me

So the scene was something like this:
Me and my 6 year old were in the grocery store, in the dairy aisle to be precise, in the yogurt section to be very precise and were having a discussion on which yogurt to buy. I was looking for certain brand and the little one was asking me to buy whatever was available. It was a Sunday night, around 6 pm. Another family   , a young couple with a little one, about 2 or little older , was "trying" to just go through the ordeal.   Their little one was not happy sitting in the cart and none of them was ready to pick her up. We all know how it is sometimes. The crying sound was full on in the background but we were least bothered. Its a little baby you know, either they make you smile or they shriek! So back to us. My 6 year old was telling me to just buy whatever is there and stop looking for that certain brand and I was going on about how I like the taste and texture better of that certain brand.  An elderly woman comes up to me and asks "Well who is the parent here?" Though I wanted to say Well what do you know lady, I can totally use being a child right now. I would love to just throw a tantrum, its been a while. I want a certain yogurt and I won't settle for anything else. Wouldn't that have been fun!! But all I did say was "Ummm, I guess that would be me!!" And she says "Oh no, I am talking about them, the ones with the crying baby. Who in their right mind, on a Sunday night at dinner time, would bring a little one to the grocery store. My mom never did that, I never did that. And then people like these wonder why they have such restless kids. Why couldn't one of them stay home with the baby. I just don't understand. "
Wow, really? No, I mean really?
I don't know why but this reminded me of a certain facebook status by a friend few months back that read
"Dear Mother-in-law,
Don't teach me how to handle my children.. I am living with one of yours and he needs a lot of improvement...!"
Ouch that must hurt!!
What I really wanted to say was "Precisely Madam, you are being so judgemental because you don't understand. Maybe you have forgotten how is it being a parent, how you sometimes as a couple just want to be together, crying baby in the tow or not! How everyone has situations only they know about, how its just so easy to feel all righteous and pass remarks on young parents and be very smug about it." But all I did say was "...............", that's right, I just drew a blank and ignored her, part of the reason was my 6 year old was rambling about how we should just get what is available and not make a fuss about that certain brand. I tell ya, so many times this parenting thing just totally backfires and hits where it hurts the most.  I was waiting for the store guy to go and check for me if they have some in stock in the back room and my daughter was going on and on about how my being so particular about a thing is making us waste time! The frigid temps in the dairy isle weren't helping either. And to top it off, the wise elderly woman was following me like a hawker on the street. Damn all I am asking for is my yogurt!!

Email ThisBlogThis!Share to TwitterShare to FacebookShare to Pinterest
Labels: growing up, parenting

We were greeted this morning by our daughter with this artwork on our kitchen wall!! 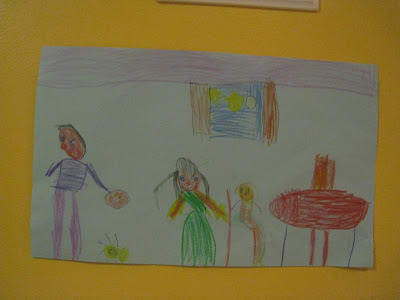 Artist: Saumya
Description as given by the artist: Moon is visible from our dining room window. Daddy is standing with a platter of puas (we eat them at moon rise to break our fast).  Mama is smiling, looking pretty in a Saree and Saumya is all ready seated to have dinner. Happy Karvachauth!
Posted by Sandhya at Tuesday, October 26, 2010 6 comments:

Our 5 year old was carrying a big heavy puzzle box to put away and the box broke while scattering all the pieces on the floor.
Saumya: Oh Oh!
Me: What happened?
Saumya: It all fell down.
I jumped down on the floor and started putting the pieces back in the box. To which she said
"If you want to help me, just leave the pieces on the floor. I know how to put them in the box"
And I tip toed back to where I was.
Ahem.
Posted by Sandhya at Monday, October 18, 2010 7 comments:

Email ThisBlogThis!Share to TwitterShare to FacebookShare to Pinterest
Labels: growing up, parenting, Saumya

Every night, Saumya, our 5 year old tries to find ways to keep awake for just few more minutes. That is the time when she would ask questions that would need long answers. She knows her parents love to satisfy her curiosity, so it works pretty well in her favor. I only end up realizing her tactic in the middle of my answers :-)
After the story time tonight, she offered to tell me a story but "with no book, mama, it will be my own story", the parent in me wanted to say no to maintain discipline while the curious  parent in me was so eager to listen. Obviously the curiosity won over discipline like every other night!!
So here goes a story made by her in "own" words.
The Cow and The Crow
Once there was a crow and a cow.
The crow was sitting on a tree branch and was saying "Cow Cow!! Cow Cow!!"
So the cow got up from the grass and walked over to the tree where this crow was sitting and asked , "Yes, what is it? Why did you call me?"
Crow was surprised and said , " Well I didn't call you!!"
Cow looked upset and said , "You were just yelling Cow Cow, weren't you?"
Crow said with a smile, "That's the way I talk you silly!!"
And the crow laughed and while saying cow cow he flew away from the tree branch and the cow just stood there wondering.
The End.
Posted by Sandhya at Thursday, August 19, 2010 8 comments:

Email ThisBlogThis!Share to TwitterShare to FacebookShare to Pinterest
Labels: growing up, reading, Saumya

My Sins Against Gender Stereotypes

My blog guru Indian Home Maker has started this fun fun tag which has created a storm on the blog world with everyone tagging each other with it! I have been tagged by the guru herself  as well as Smitha. The tag is called ‘My Sins against Gender-Stereotypes’. And you must tag twelve blogging friends or else you will be cursed to wear blue clothes pants if you are a woman and pink shirts if you are a man – for next twelve years.
Though I love color blue and really no matter how much you love a color you don't want to wear the same thing for 12 years!! So here we go with my sins......


It seems I got so late picking up the tag because everyone around seems to have been tagged already.
I tag
Posted by Sandhya at Friday, July 02, 2010 14 comments: 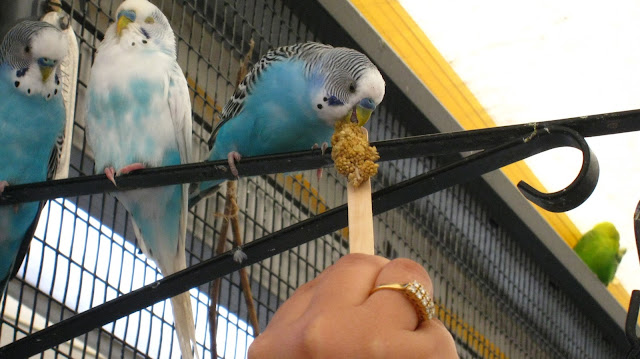 So I decided not to cook and let these people eat cereal for dinner.

Inspired by children's book If You Give A Mouse A Cookie
Posted by Sandhya at Wednesday, June 16, 2010 15 comments: